Written by Rebecca Henderson
May 2021 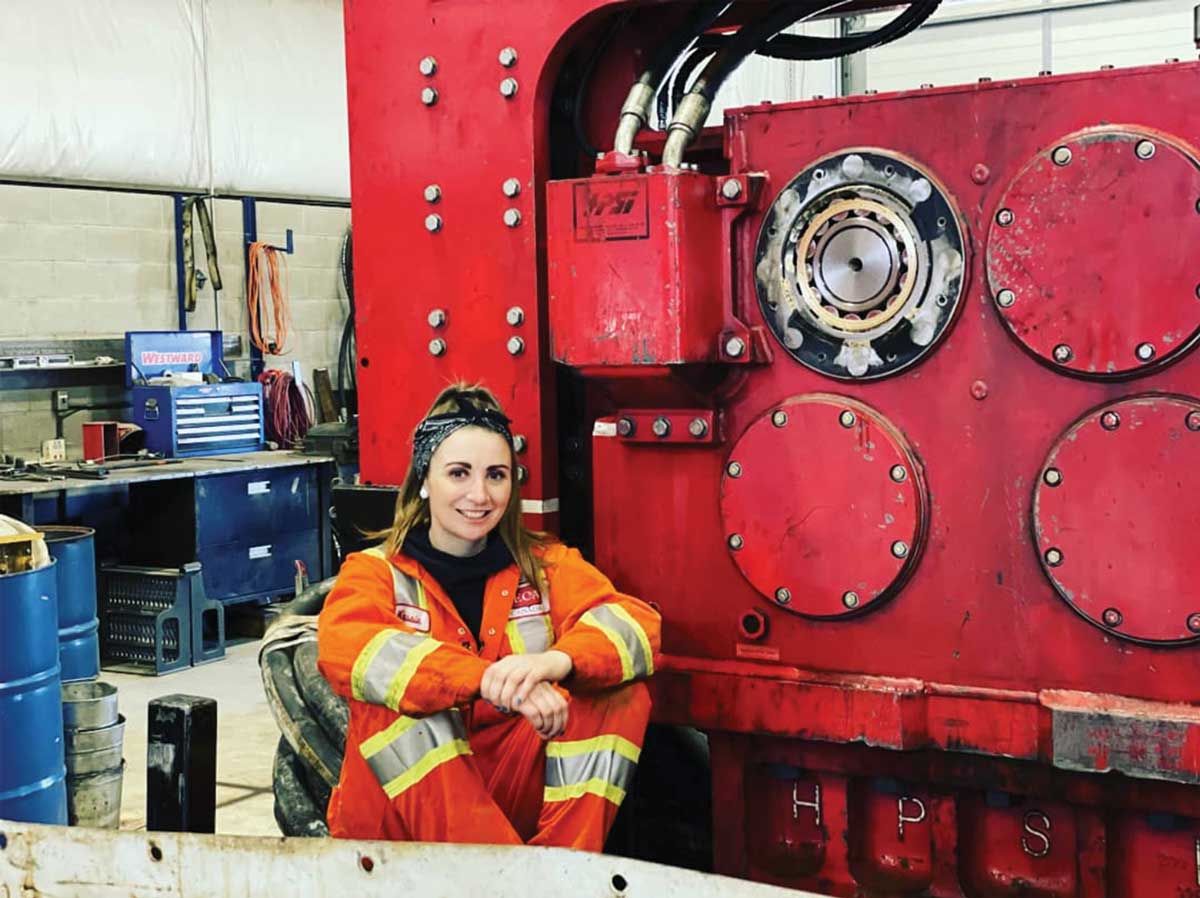 Only three months after graduating from college for heavy equipment training, Kassie Davidson’s doctors diagnosed her with multiple sclerosis (MS) – a potentially debilitating disease of the brain and central nervous system. “It was heartbreaking,” said Davidson. “I was only three months graduated from college when my doctors told me my career was over.”

Growing up, Davidson was predisposed to the world of mechanics, always interested in how each piece of equipment came together, similar to a giant puzzle.

“My grandpa was an automotive mechanic his whole life, and my dad is a 310T Mobile Truck and Trailer Mechanic,” she said. Even Davidson’s first job matched her interests – she worked at Mr. Lube when she was 15.

“When I got to high school, I remember falling in love with auto class,” she said. “I took it all three years and received top of the class award for all three years.”

However, after completing a co-op at Toromont Cat (a heavy equipment dealer) and another at Cambridge Truck and Trailer, Davidson knew she either had to “go big or go home.”

After she graduated high school in Cambridge, Ont., Davidson moved to Lindsay, Ont., where she attended Fleming College and was the only female in a class of 100 students. While many students in the heavy equipment industry go on day release (work without pay) or block release (apprenticeship training), Davidson fast-tracked herself through heavy equipment schooling, completing all three levels in one year.

“I like being a doctor of machines,” she said. “Not many people get into what I do, and I just love knowing when driving down the road that, oh, yeah, I can fix that.”

Davidson’s MS diagnosis, while disheartening, did not deter her from achieving her goals. She approached it as a personal challenge, following her doctor’s medication orders and diligently exercising her brain.

“I read a lot of books and kept up my training,” she said. These exercises included reviewing her collection of books on engines and hydraulics, and strengthening her mind through brain training quizzes and apps.

“I have a folder on my phone labelled ‘Memory Games,’” she said. “There’s one called, ‘Heavy Equipment Technician Quiz Practice.’”

Even though the disease delayed Davidson, she received her license for heavy equipment. Shortly after, she acquired her second trailer credit, 310T, giving her the ability to work on transport trucks.

Davidson worked for a few construction companies before Equipment Corporation of America (ECA) Canada, a leading provider of drilling and pile driving foundation equipment in North America, hired her as a fully licensed 421A Heavy Equipment Technician. A heavy equipment technician diagnoses and repairs heavy-duty equipment mainly used in construction.

“I was interested in working for ECA because there’s a lot more to know than what I thought I did,” said Davidson. “I’ve gotten to work on dozers and excavators, scrapers and rock trucks. ECA has equipment that I’ve never worked on – and it caught my interest.”

Davidson says that working for ECA Canada was too thrilling of an opportunity to pass up. She had been looking for a fresh start and working for an internationally renowned company would certainly satisfy that search.

Although the company has been around for over 100 years, Davidson is the first female service technician in ECA’s history. For Davidson, she recognizes how important representation is right now.

“It’s not easy being a female in the trades,” Davidson said. “We normally encounter issues. I’ve looked for a place where I can finally be appreciated and valued, and ECA fills those requirements.”

Something as simple as a female-designated washroom at ECA is a luxury, according to Davidson.

“The first thing someone will tell me at a new job is, ‘If you want equal treatment, you can use the men’s washroom,’” she said. “I’ve always just accepted it. But when my manager at ECA told me they have a female washroom, it was like, ‘Really?’”

However, concerning her status as the first female service technician in ECA’s history, she isn’t too phased by the designation.

“I think it comes with some expectations for sure,” said Davidson. “So, I guess I feel a little bit of pressure being the first female, but honestly, I’ve been the first female everywhere I worked.”

In a male-dominated field, Davidson has experienced people diminishing her skillset because of her gender. She recalls several times when applying for jobs where the interviewer would assume ‘Kassie’ stood for the male version of ‘Casey’.
“They think it’s a man’s name,” Davidson said. “I ask, ‘So do you still want me for this interview?’ Most of the time, they say yes, but sometimes, honestly, I’m told no.”

For Davidson, their ‘no’ is not a hindrance, but a provocation. In one example, an employer told her that hiring a female to work in the shop is like ‘hiring someone that doesn’t speak English.’

Davidson challenged that notion, arguing her case and refusing to take ‘no’ for an answer. She landed the job. However, that triumph also came with the added pressure to prove herself daily. Sometimes, she would complete tasks solo that would normally take two men to accomplish.

“They would make me do it by myself, almost as if they wanted to see me fail,” said Davidson. “Working at ECA, I think I’ve finally found a company where my skills are never questioned or challenged because of my gender, and it’s amazing.”

Davidson’s advice for other women looking to enter the trades, or who are currently working in the trades, is don’t give up.

“Stand up for yourself and have a strong opinion. But also listen and consider others because their opinions are just as important as yours.”

Another strength women possess is the ability to understand their industry differently, says Davidson. Not every decision requires the person with the utmost strength.

“People look at me – I’m a rather lightweight female – and they think I can’t do it,” she said. “But you just have to figure out a different way. Just be smarter. You don’t always have to be the muscle.”

Davidson also encourages women to find a company and co-workers who will help them and uplift them.
“I would love, really, to make it easier to be a female every day at work,” she said. “I don’t want women to have to defend their point of view on everything.”

While Davidson recognizes how her position at ECA will contribute to better female representation in her industry, she also recognizes the industry must change too. ECA remains an unusual workplace in its inclusion of women in heavy equipment positions.

“It’s honestly so hard to persuade other females to go for those careers because truthfully, it can suck,” she said. “It can anger you so much. Still, if you truly love this career, accept the challenge and do it because then, other women won’t feel so isolated. We’ll have each other, and if more women get into this field, things will change.”

Davidson’s determined to keep on challenging herself. She would like to use her 310T apprenticeship, 421A licence and any other ticket she can acquire in her journey. For now, though, Davidson aims to keep building her reputation and be the best mechanic in her field.