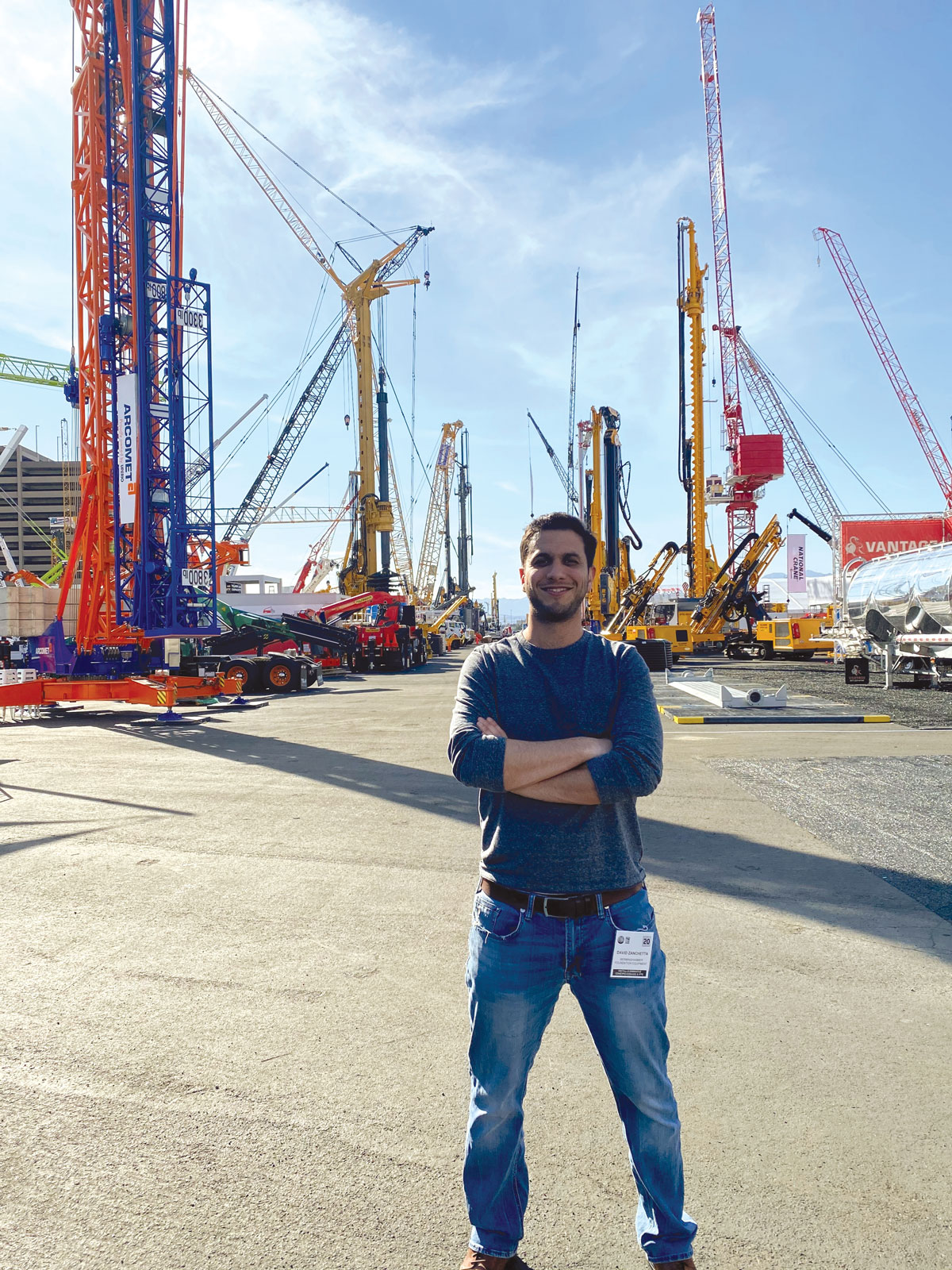 David Zanchetta, P.Eng., became interested in building at an early age while playing with Lego and stacking the multi-coloured blocks to make miniature houses, complete with basketball courts and swimming pools. Years later, Zanchetta has taken that childhood passion for construction and built himself a career with Berminghammer Foundation Equipment/Soletanche Bachy Canada, one of Canada’s leading suppliers of foundation equipment and support for projects around the globe.

“I always wanted to design buildings people could look up at admire, so I went to McMaster University here in Hamilton for civil engineering and management,” said Zanchetta. “So it’s kind of funny that life took me in a slightly different direction, and I ended up working on foundations that are buried and rarely seen.”

Originally it was his love for the City of Hamilton that led Zanchetta into the business of deep foundations. After completing his education at Hamilton’s McMaster University in 2012, he approached Berminghammer Foundation Solutions (as it was then known) for work as an estimator in order to stay in the area. After a decade with the company that gave him his start, Zanchetta has grown to love the work that he does, designing the equipment that installs foundations, and sees his role as being a problem solver for what challenges the industry.

“If a client has to go deeper than they currently can with their existing rig, they’ll come to Berminghammer and we’ll create a solution for them,” said Zanchetta. “It all takes me back to when I was a kid playing with my Lego, using a lot of key components – in terms of our lead systems – that we place in different ways to solve problems. It’s a job that has our team constantly coming up with new innovations and new ideas, and that is the part of the job that I fell in love with.”

There is no such thing as a typical workday for Zanchetta, every single day offers up something different. A large part of his role is devoted to sales and networking with potential customers, doing presentations and showcasing what Berminghammer brings to the table. The other side of his job revolves around taking calls from clients seeking solutions. It is then up to Zanchetta to sort through Berminghammer’s inventory to see what’s on hand or, if there is enough lead time, what the company can build to suit the specific needs of the customer.

Unfortunately, the nature of the business means that there is rarely enough lead time, and customers tend to call on Zanchetta when they are in a jam or trying to do something that has never been accomplished before.

“A lot of the time the customer will come to us with really short notice to pull something together,” said Zanchetta. “The most challenging part is just trying to find something that makes sense within their timeframes or – if that doesn’t work – trying to get a little bit more time to execute the project.”

The part of the job Zanchetta enjoys most are those days when he gets to go out to the sites where Berminghammer equipment is being used or when he can see how others in the piling industry do things. A curious mind is something that Zanchetta believes is critical to finding success in this business and that, while you can know a lot, there will always be something new to learn.

“Here at Berminghammer, we manufacture diesel hammers and have a growing focus on reverse circulation drilling, but I also get to work with many different customers who ask us to create new tooling for them and their specific ground improvements,” said Zanchetta. “I always find it tremendously rewarding to learn about all the different things that people do to create foundations. Don’t get me wrong; working with what Berminghammer specializes in is great, but I also love hearing about what others are doing as well.”

In the relatively short time Zanchetta has been part of the deep foundations industry, he has witnessed considerable change with projects constantly going bigger and going deeper. When Zanchetta started, he believed that 18-inch down-the-hole (DTH) hammers were massive, but now routinely sees 52- and 60-inch DTH bits in use. Where 36-inch continuous flight augers (CFA) were once considered large, 48-inch CFA has become commonplace.

“I think that has to do with the fact that we’ve already built on a lot of the land that’s kind of easy to build on, and now we’re going and building on the land where it’s harder to get to bedrock and get something substantial to support a structure,” said Zanchetta. “It’s exciting to know that projects we are working on today are breaking yesterday’s depth records and it is always great to be the ones pushing the envelope.”

For those looking to follow his footsteps into the deep foundations sector, Zanchetta recommends broadening their horizons and learning as much as possible. At McMaster University, Zanchetta focused his studies on both civil engineering and management, and now that he is working in the industry, he has found that the management training he received has been just as valuable as engineering for the trajectory of his career.

“I am an engineer, but a lot of what I do is actually more of a technical sales role and I’m always evaluating what’s actually doable in terms with engineering principles in mind,” said Zanchetta. “And in terms of sales, order management, working with customers and marketing, there has definitely been an advantage for me taking a program that’s both engineering and management based. Where I am right now in my career is just a perfect fit for my education and just who I am as a person.”

Zanchetta also believes that an important skill to have is the ability to foster strong relationships, both with the customer as well as within the deep foundations industry itself. While there are many people that work in piling, the sector – particularly in North America – is relatively small and, if you work with someone on a project, there is a good chance that you will one day have to opportunity to work with them again in some capacity.

“I can’t count how many times I’ve quoted someone when I was first starting out and then received orders from them working at a different company years later,” said Zanchetta. “Once you create a trust with someone, it doesn’t matter where they go, what company they go to or what their new role is; if they trust you and they need your work in the future, they’re going to come back to you. That’s why it is so important to maintain that trust.”

Looking ahead, Zanchetta hopes to continue his role at Berminghammer, as well as explore new opportunities to educate others; whether that means mentoring people within the company, demonstrating different techniques to the customer or highlighting what Berminghammer can offer the deep foundations industry.

“When I go out and do presentations to explain what projects Berminghammer has done or is working on today, people are amazed and tell me, ‘I didn’t even know that was possible,’” said Zanchetta. “So, while I am hoping to focus on more one-on-one mentoring in the future, it’s still exciting for me to go out and let people know what’s going on in this industry and get them excited about what’s possible in deep foundations.”