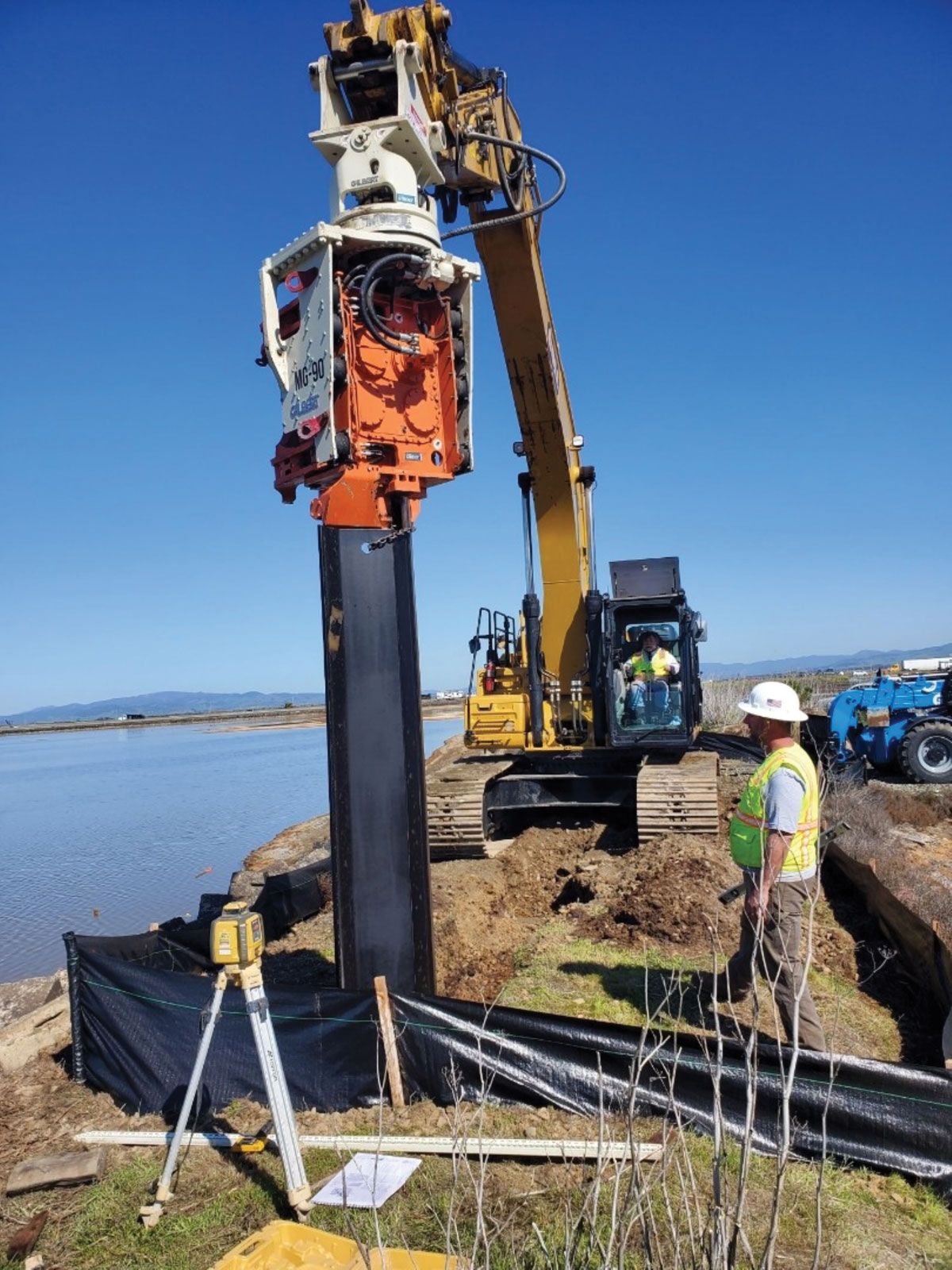 In March 2021, Hanford Arc participated in the Mare Island Levee repair project. Crews excavated trenches as they dug with the sheet pile. Despite the windy conditions, the job was successfully finished ahead of schedule.

For 36 years, Gilbert Products, Inc., has been a world leader in forestry, planning, construction and trail surfacing equipment design.

Formed in 1986 by Sylvain Gilbert in Roberval, Que., as a maintenance and repair company for sawmill equipment, today the company has 26 products in four divisions, 135 employees and more than 1,300 customers worldwide. Gilbert is the sole owner of the company and his son, Frank, is the production manager.

“Since the beginning, innovation has been at the heart of our ideology,” said Gilbert. “It is the driving spirit behind numerous innovative products that have revolutionized their industrial niches. That is how we launched our first Forestry Felling Head in 1988, and our first snow groomers in 1993.”

Gilbert Products’ first sawmilling piece of equipment was its highspeed planer that was sold in 1998. That was followed by more than 150 planer projects installed and in operation worldwide. The construction division was put on the market in 2014.

“Since then, we have been proud to collaborate with valuable dealers around the world, we are now in many countries,” said Gilbert.

The company is especially proud of the Gilbert Grizzly MultiGrip (MG60 and MG90) that it designed, supplied and manufactured specifically for deep foundation construction work.

“This is a very versatile excavator-mounted vibratory pile driver,” said Gilbert. “It serves a wide variety of applications such as building shore protections, bridge construction, building dams, railway bridge maintenance, reinforcing ground around buildings, driving tubes and piles in constraint areas like below ceilings, salmon habitat enhancement projects, driving tubes in the sea from a barge, removing H-beams from construction fields and many more.”

During the spring of 2021, the MG60 was purchased by the Texas Department of Transportation (TXDOT) to replace an older attachment that was not as advanced or as efficient as the Grizzly Multigrip.

The Vancer field technicians worked with the area Volvo dealer and installed the MG60 at the TXDOT site in Denison, Texas.

“Vancer trainer Matt Baker and accounts manager Joel Marreel travelled to Denison to train and work with the TXDOT as they began installing sheet pile for a retaining area along the road and lake,” said Gilbert.

“This was the first of three larger jobs that the TXDOT scheduled for the MG60 as they had patiently waited for good weather and the MG60 to arrive and be installed. The operator and crew commented on the smooth operation of the MG60.”

In summer 2020, Gilbert delivered a Grizzly MultiGrip MG90 to Hanford Arc, a construction company based in Petaluma, Calif.

Despite the windy conditions, the job was successfully completed ahead of schedule.

“The Gilbert MG90 performed great on this project!” Jensen said.

When asked what the near future holds for his company, Gilbert doesn’t miss a beat.

“We are presently working to optimize production processes. We recently finished a project totalling an investment of $3,140,500 in order to improve the quality of workspaces, increase productivity by automating certain processes and reduce our environmental footprint.”

He says that the company has new products on the market such as its 3015 excavator-mounted felling head for the forestry industry. Gilbert Products also developed a Hydraulic Drop Hammer that will be on the market this year.

“We believe both pieces of equipment will be the perfect combo for our customers,” said Gilbert. “Our goal is ultimately to consolidate our leader position in the industries where we are present.”

Gilbert Products recently expanded its operations with a new building dedicated to the company’s employees. An extension of the head office, it will be used mainly for meals, entertainment and corporate activities.

“The 6,500 square foot expansion represents a $1.3 million investment,” said Sylvain Gilbert. “The work started in September 2020, and was competed at the beginning of 2021. This new extension is meant to be a common living area – a space where the employees’ wellness is a priority.”

This article originally appeared in PileDriver and is reproduced here with permission.