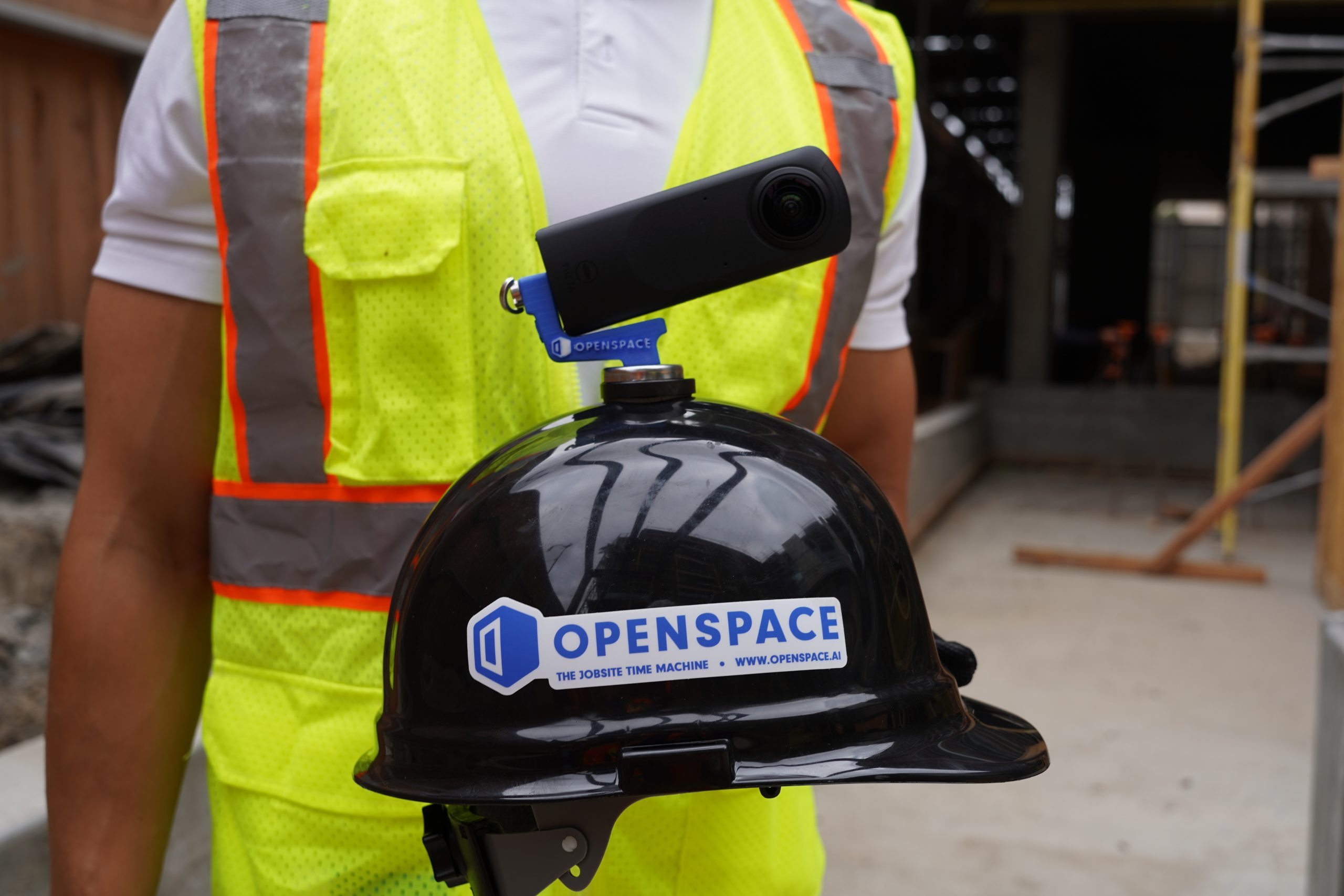 A picture is worth a thousand words. So, when managing a jobsite, why settle for walking the site and marking down observations or taking various photos that have to be downloaded and shared later when artificial intelligence (AI) can do a much better job?

Many contractors and project managers still manually track progress on their jobsites, which can be time-consuming and inaccurate. The founders of OpenSpace recognized a need to streamline this task by automating the process, leading to the creation of the OpenSpace AI technology.

OpenSpace was conceived and built on the jobsite rather than in an office or conference room. Co-founder and CEO Jeevan Kalanithi worked in the construction industry for many years and saw some of the struggles builders faced firsthand, which inspired him to improve site processes for others in the industry.

Based in San Francisco, OpenSpace provides next-generation, 360-degree construction photo documentation software. In addition, the app features some of the most innovative analytic tools in the industry. Almost like augmented reality (AR), information becomes a living and breathing document showing a building’s life cycle from conception to completion.

“Even now, with other 360-degree solutions, the way you normally capture a jobsite is to pin your location manually, or where you’re standing at each point in the floorplan,” said Jeff Flores, a senior solution manager at OpenSpace. “With our technology, you just put a camera on a hard hat, open the app, tell it where you are standing, hit start and then walk.”

Walk the site with a compatible 360-degree camera, and the application will automatically map every image to your provided floor plans by taking two photos per second.

“What OpenSpace is doing is comparing what’s in the field to what’s supposed to be shown in the drawing. It’s basically confirming things visually,” said Flores.

OpenSpace allows clients to view projects whenever possible, whether at the jobsite or in their offices. In addition, the technology enables the user to review previous progress reports and incremental installations, and compare the site’s current state to 3D renderings of the completed building.

“The way it works is that each time you walk the jobsite, it gets updated because our vision engine and AI is seeing what is there visually – then basically adding it to the percentage of the specific task that has been completed,” said Flores. For completed real estate, the app is also helpful in monitoring and updating a building’s status.

If construction has been completed to such an extent – for example, where pipe or rebar is now covered – OpenSpace makes it possible to go back and see where those lines are in reference to the walls or floor surrounding it.

“You can go back and verify where that item is, and you don’t have to do any destructive investigation while on site. This is one of the ways we can save project managers money,” said Flores.

Saving time is another benefit of using the software. “To do a manual location pinning process would take me all day, but with our technology, I could walk 200,000 square feet in 30, 45 minutes,” said Flores.

The company continues to develop the technology and offers incremental updates to ensure its technology is as innovative as possible. In 2019, for instance, the company upgraded its vision engine and improved upload timelines from upwards of 48 hours to just 15 minutes. A longer timeline may work for risk mitigation evaluations long term. Still, for day-to-day operations management, the faster the program, the more beneficial it would be to project managers.

Uploading information for the first time might take more time due to the original file’s size, but one the user becomes accustomed to the technology, the processes are streamlined as the program learns the site layout. OpenSpace also features a desktop sync app to avoid overusing data or excessively long upload times.

OpenSpace can help clients buy, build, manage and sell the property by offering items such as pre-bid walkthroughs or assessing a site even before breaking ground. “Although we work on any type of project, where we truly excel is vertical construction,” said Flores. “You can basically jump to any part of the building that you want to see at any point in time. Having that jobsite visibility is really powerful.”

It is not just useful for construction purposes, but also in many management endeavours. Whether working internationally or across town, physically visiting a jobsite takes time. With OpenSpace, clients can see a jobsite from anywhere and even fill its space with future tenants by showing the site online.

The program allows supervisors to check in on progress, increasing overall accountability and eliminating the need for greater supervision. Solving construction problems can take a lot of time, money and workforce the longer they go unnoticed. OpenSpace streamlines this process by providing a site reference over time, giving users the evidence needed to resolve problems quickly and fairly.

Automated progress tracking offers other benefits as well. Not only can users see the actual conditions on the ground at a work site, supervisors can also forecast potential issues more accurately, coordinate better and allocate resources more effectively.

Beyond that, it can also assist with communications. “It makes it really easy to add notes after taking these high-quality photos,” said Flores. “If you wanted to take a field note, you could pull out your mobile device and take a picture of whatever it is – say rebar that doesn’t have a cap or a cover on it – and you can add a status. And since it might be a higher priority, you can add people to an alert list within the field.”

For example, the project safety manager could be added to an alert list to receive updates. With a simple and intuitive dashboard, OpenSpace is accessible to any level of employee.

“It’s all from your iPhone,” said Flores, “You don’t need this huge scanner or a special person; you can do it yourself.

“We make use of the new iPhone’s LiDAR (light detection and ranging) sensor. It’s almost like having a 3D scanner in your pocket.” The primary purpose of LiDAR in the iPhone is to improve AR implementations.

OpenSpace can also create a collaborative space for individuals working remotely on the same project.

“When you’re working with multiple stakeholders, it’s really useful because you can have these digital or remote conversations consolidated within OpenSpace. It’s like we’re all standing in the same place on the jobsite,” said Flores.

The OpenSpace team features computer experts and industry veterans who have received MIT, Caltech, and Stanford PhDs, ex-superintendents and project managers who have worked in both the field and office.

The people behind OpenSpace also understand that software exhaustion has become a real issue in such a digitized age. Not everyone has the technological savvy to pick up new systems and applications. One of the prominent selling features of the technology is its simplicity and approachability, with real-life experience and AI working together.

Cost is based on the construction volume or the size of the project. This ensures that the technology is accessible to contractors, regardless of their scope of work. In addition, OpenSpace offers annual subscriptions covering everything from quick renovations to multi-year projects or single jobsites to large expansions. These prices also include unlimited captures, unlimited project members and ongoing technical support from the OpenSpace team.

Some significant benchmarks the company has reached since opening in 2017 include a 50 per cent reduction in client travel costs as staff are no longer required to visit a site physically. Using the application also saves an average of 2.5 per cent of overall construction costs, which is significant when considering multi-million-dollar projects.

The benefits are not only monetary with OpenSpace users seeing an average of one month project acceleration on 24-month projects, which cuts back on labour and allows that time to be allocated towards new endeavours. To date, the software has captured more than 10 billion square feet of construction images on jobsites worldwide in more than 80 countries.

With workers being pushed to their physical limit daily, this technology can eliminate the stress of tedious administrative tasks. OpenSpace is working on improving these processes and offering a simpler solution for those in the industry. According to Flores, “the power of automation, simplicity and ease is beyond measure.”

For more information or to request a demo, visit www.openspace.ai.