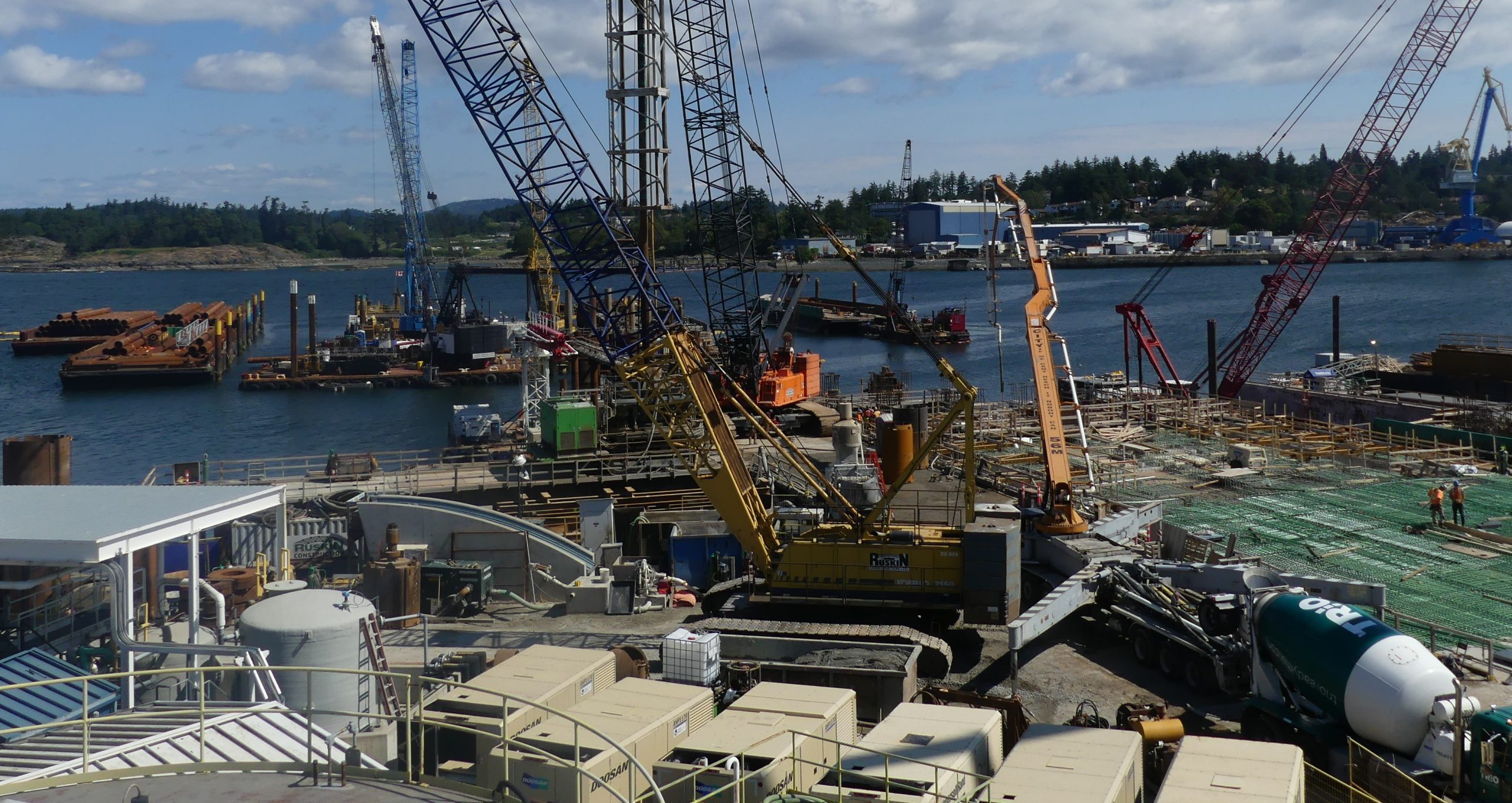 With a piling completion date slated for the second quarter of 2023, Ruskin Construction, which has offices in British Columbia, Alberta, and Alaska, is currently completing the construction of a large pier at Esquimalt Harbour in Greater Victoria on the southern tip of Vancouver Island.

The company specializes in design-build, bridge, marine, foundation, railway and aerial pipeline construction services across North America and began work on the Canadian Forces Base Esquimalt B Jetty Recapitalization in January 2020. The piling scope of work on this $283-million-project includes a multi-purpose 26-metre-wide marine jetty that extends 270 metres from the existing shore. Ruskin Construction’s portion of the project is approximately one-third of the total budget.

“The jetty structure is supported by 273 large diameter steel pipe piles with varying depths,” said Ruskin project manager Owen Langton. “The construction site is at the heart of the largest military naval base in Western Canada. Site operations must, therefore, be coordinated with the base’s operations.”

Working with Pomerleau Construction on this project, both companies continue to tackle significant technical and logistical challenges.

“Our scope of work includes the installation of all drilled socket foundation piles of up to a 95-metre-depth, complete with drilled rock sockets, reinforced concrete infill and installation of three-inch thick connection plates on the top of the piles,” said Langton.

Deep foundation rock sockets consisted of either piles seated directly into bedrock with drilled holes below the pile tip, complete with reinforcing steel cages and concrete infill or pre-drilled 1.5-metre oversized holes in bedrock and piles placed into an oversized hole complete with partially concreted annulus.

“To date, there is a total of 39 bents, of which 25 have been completed in their entirety, and half a dozen others are in various stages of completion,” he said.

Piling work consisted of two main activities. This included a trestle bridge which provided a working platform for a 300-ton crane.

For the second activity, there was the marine piling that was installed by vibratory hammers to bedrock. These piles – which are one metre in diameter with a wall thickness of up to 34.9 millimetres and have a weight of up to 81,700 kilograms – are required to be installed with 0.025 per cent accuracy to prevent pile rock sockets from coming into contact with each other.

“It was essential that the starter piles were driven very accurately as the piles got too heavy to be removed once the entire pile had been constructed in-situ. Any errors in location or verticality were exacerbated as additional lengths were added to the 39-metre starter piles,” said Langton.

The sheer depth and length of the foundation piles posed a major challenge to prevent rock sockets from colliding, as well as to accommodate the tight superstructure design. Drilled socket piles of this length are rarely seen in construction, and the Ruskin team was required to adjust methodologies and fine tune equipment continously, in conjunction with their subcontractor, to meet the client’s high expectations successfully .

In fact, Ruskin Construction’s experience on this project has made them one of the few contractors in North America to have performed drilled foundations to this depth.

At any given time during construction, Ruskin has five active cranes onsite ranging in size up to 300 tons. In addition, another two cranes were used by Pomerleau Construction for its scope of work. Project-specific lifting plans have also been developed to ensure that all lifts are completed safely and without incident.

“The vast majority of lifting operations are being carried out from barges on the water, further increasing the complexity of the lifting,” said Langton.

He says all personnel working on the project also required security clearances.

“This initial hurdle was compounded by the federal requirement for double vaccination when COVID-19 hit. The combined effect of these two requirements was to severely curtail the number of crew that were qualified to work on the base.”

Th design environment, geology/soil, noise and abatement also brought further challenges, some of which included pipe piles with depths into overburden varying from 15 metres to 100 metres. Piles were drilled into rock to form rock sockets and in some locations, on steep rock topology. The types of piles used included steel piles one metre in diameter, steel pipe casings two metres in diameter, rebar cages and concrete.

“The project team successfully overcame unforeseen ground conditions as the seabed slopes were very steep in some areas. This made the piling even more challenging,” said Langton.

“All these barges limited the navigable project’s footprint,” said Langton. “In this constrained area, coordination was complex. The B Jetty project’s central location in an active naval base required extensive coordination with harbour authorities and base operations, whose activities always took precedence over the project activities.”

Drilling work was scheduled with two 10-hour shifts per day. At times, these work periods were curtailed due to local noise bylaws. Hard rock conditions also caused delays as drilling times were longer than the schedule permitted. The need to seat and seal 10-foot caissons required to be installed on 128 piles to facilitate the installation of pile connection plates below sea level was another scope of work with its own challenges.

“Fractured rock provided additional challenges in achieving seals on casings to enable cleaning of piles prior to concrete placement,” said Langton. “The standard of cleaning required necessitated innovative ideas and was the cause of delay early in the project.”

A project of this magnitude also calls for special safety protocols and measures.

“As a working military harbour, the EPP (Environmental Protection Plan) was especially stringent and the use of two dozen large pieces of equipment, along with miles of hydraulic hose, posed a real challenge for maintenance,” said Langton.

“The creation of a delineated construction zone, in collaboration with client operations personnel, created an area that allowed the team to able to move freely and conduct construction activities,” said Langton.

The Esquimalt Harbour project in Victoria requires a great range of piling equipment that includes:

“As concrete is being placed offshore, Pomerleau has been required to use line pumps with placing booms, allowing us to pour concrete at a distance of up to 224 metres from the shoreline,” said Ruskin Construction project manager Owen Langton.