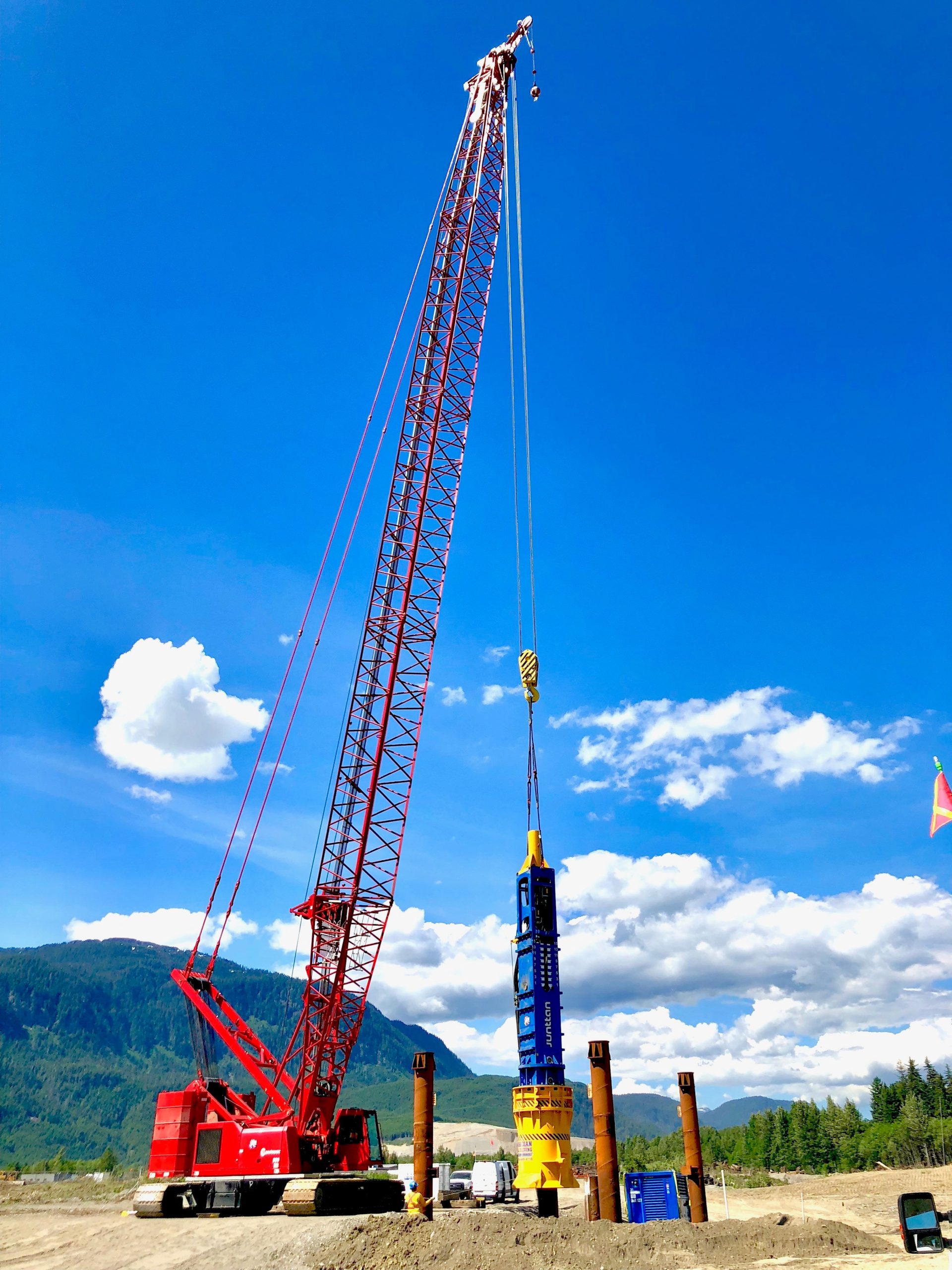 The $40-billion LNG Canada Project is the largest energy project in Canadian history and one of the largest industrial projects in the world. Ledcor-Haisla Limited Partnership (LHLP) and Keller Foundations Ltd., operating jointly as LHLP-Keller, were subcontracted to perform extensive piling work on the gas liquefaction and export facility. LHLP-Keller first mobilized to the site, near Kitimat in northwestern B.C., in April 2019 and demobilized in September 2021.

The two-phase program included driven pipe piles up to 1.5 metres in diameter and 75 metres deep. These piles were driven using a large 20-ton hydraulic impact hammer and a 275-ton crawler crane.

“Likely one of the larger test pile programs completed onshore in Canada. Once the test and reaction piles were installed, we then installed our testing frame that would apply 25 meganewtons of force to the test pile,” Asfar said.

LHLP-Keller’s work on the Kitimat River Side Channel (KRSC), for example, required strict hazard controls and measures to mitigate potential environmental impacts of deep excavation cuts and the in-stream water work on a fish-bearing water body. Asfar says that the project, which included installing and removing two sheet pile cofferdams – to enable the construction of two inlets that hydraulically connect the KRSC to the Kitimat River – required more than just water turbidity monitoring.

A containment boom was installed around the work areas in the river and hydraulic hose wraps were installed on all applicable equipment working nearby. Stationary equipment, including the vibratory hammer power pack, was equipped with drip trays with a capacity to hold 110 per cent of the total liquids contained in the equipment. Biodegradable hydraulic oil was used to lubricate the connection points between adjacent sheet piles. Fish salvages and bird sweeps were conducted to further eliminate harm to wildlife, in addition to full-time hydroacoustic monitoring during in-water sheet pile installation to ensure that sound pressures did not exceed 30 kilopascals, with a bubble curtain system available for use if sound pressures did exceed that limit.

Ledcor–Haisla Limited Partnership (LHLP), established in June 2011 as a partnership between the Haisla Nation and Ledcor, “is one of our most successful First Nations partnerships,” said David Asfar, project manager at Ledcor. LHLP specializes in light and heavy civil earthworks, deep foundations, waterfront infrastructure development, roads and bridges, industrial facilities, power generation and distribution, pipeline work, fibre optic installation and maintenance, resource development and commercial and industrial projects. The company is active on multiple projects throughout the northwestern B.C. region, providing jobs, training and development opportunities to the Haisla First Nation communities and local businesses in the region.

One of the programs initiated on-site was the Construction Readiness Training Program, which included three to four weeks of training, followed by employment with LHLP.

“We used this program as well as our typical recruiting process for experienced workers to employ Haisla First Nation members in the work completed on LNG Canada,” Asfar said.

Once the two inlets were complete, and the Kitimat River Side Channel was hydraulically reconnected to the Kitimat River, the LHLP-Keller team remobilized to remove the cofferdams with the same crane and vibratory hammer setup.

LHLP-Keller then provided the deep-driven pipe pile foundations for three bridges along the LNG Canada Heavy Haul Road. The Alcan Way bridge was built to replace an existing bridge and support the haul truck fleets going to and from the LNG Canada site on the North Haul Road. In addition, the Anderson Creek and Moore Creek bridges were required to safely support the very large modules (VLMs) transported to the project site from the coastline material offloading facility. The VLMs, some more than 10 storeys high and weighing up to 11,650 tonnes, will be used to process the natural gas supplied by the 670-kilometre Coastal GasLink pipeline and then converted to liquefied natural gas.

For this project, LHLP-Keller, with support from their retained engineer, designed, supplied and installed 136 open-ended 30-inch pipe piles driven to embedments up to 55 metres deep; installed 128 pile plugs for the Moore Creek and Anderson Creek piles; and designed, constructed and executed two static compression load tests on the installed piles at Anderson Creek and Moore Creek. End of Initial Drive (EOID) and Re-strike (BOR) PDA testing were also performed.

The subsequent Outside Battery Limits piling program consisted of installing 1,700 open-ended driven pipe piles ranging from 406 millimetres to 914 millimetres in diameter and up to 22 metres deep, as well as the design, construction and execution of two static compression load tests at the existing TP1 and TP2 testing sites. EOID and BOR PDA testing were also performed, as well as pile splicing for piles found to have insufficient capacity following the design requirements.

LHLP-Keller also supplied and installed the piling for the bund wall around the LNG Canada plant perimeter, driving sheet piles across approximately five kilometres to form a continuous flood and wildlife barrier around the entire site — a total wall area of 33,918 square metres of sheet pile. As the work fronts were on the plant site’s edge, nesting birds were closely monitored, and environmental sensitivity was extremely heightened due to the proximity to the natural habitats.

Given the required shutdowns between work scopes, this project was originally anticipated to take 18 months, but the collaboration between the client and the LHLP-Keller team “enabled us to re-sequence activities so that the construction could progress continuously,” Asfar said, and, “the pile installation schedule ended up taking just eight months to complete the five-kilometre wall around the plant site, significantly advancing other work scopes onsite.”

LHLP-Keller’s choice of a small-footprint rig and hydraulic hanging vibratory hammer to install 62 pairs of 50-foot sheet piles from the bridge platform that crosses Moore Creek and spans its north and south embankments allowed the continued use of the existing bridges throughout construction.

“There was significant overlap between a lot of these projects, which brought its own set of challenges with personnel and equipment resourcing, mostly within the COVID-19 timeline,” Asfar said. “We started the first project at the LNG Canada site prior to health restrictions caused by COVID-19, so construction was normal for the first 10 months or so. In March 2020, COVID-19 was in full swing, and some of our projects experienced temporary shutdowns due to site capacity requirements and public health restrictions, but because of the dedication and hard work from our construction crews, we were able to resume work and ultimately complete the project without any significant delay.”

“Safety is our top priority, and it was embedded into all aspects of our work,” Asfar said. “Piling is inherently a high-risk activity due to the size of equipment and materials we use daily. To mitigate these risks, we implemented multiple exclusion zones around the piling rig and drop zones during hoisting operations, as hoisting is one of the industry’s largest risks to-date.”

In addition, Asfar points out that the project was successful because the crews were committed to the LHLP-Keller safety culture.

“Since we were on the project for over two years, we learned a lot about how it operated and how we operated internally. This gave us the opportunity to continuously improve our operations and processes to ensure we continued to operate safely and productively,” he said. “We are very proud of the work our teams completed as part of the LNG Canada Project, particularly during the COVID-19 pandemic that affected the world. Our safety record was world-class — it was shown daily from the front-line workers up to management, and this truly showcased LHLP-Keller’s values. The amount of work completed and the level of collaboration between the owner, our client and the LHLP-Keller team is a testament of what can be achieved in the construction industry, even while going through a global pandemic.”